What’s been going on at the farm over the past six weeks. Lots of spider webs. 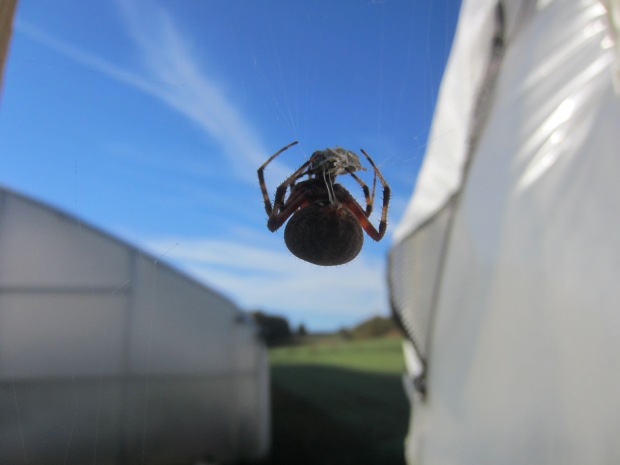 We planted our garlic crop for next year. Three varieties of hardneck garlic and one softneck. 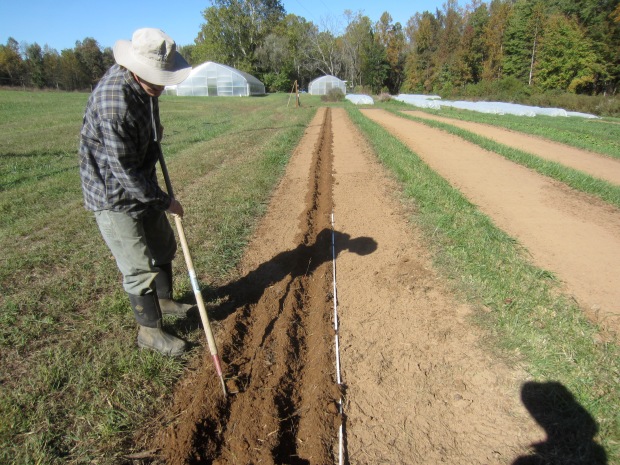 This is our first time growing softneck garlic and it planted quite a bit more square footage than we had planned for. The softneck garlic has lots of variation in clove size compared to the hardneck garlic, so it will be interesting to see if there is as much variation in the ultimate size of the bulbs. 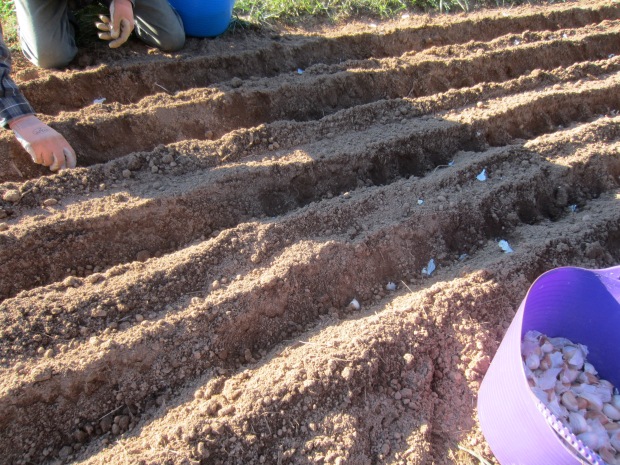 We planted five 90′ rows, which is over double what we had this year. 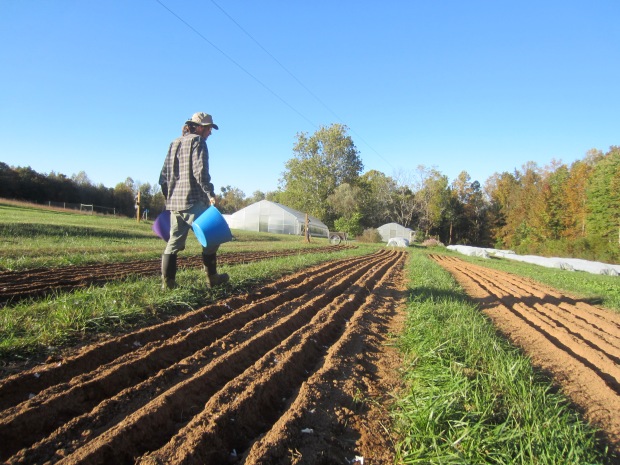 It’s a month later and the garlic has started the emerge! I hope garlic is not a tasty crop for deer. Our new fence will not protect this area for probably another three months. 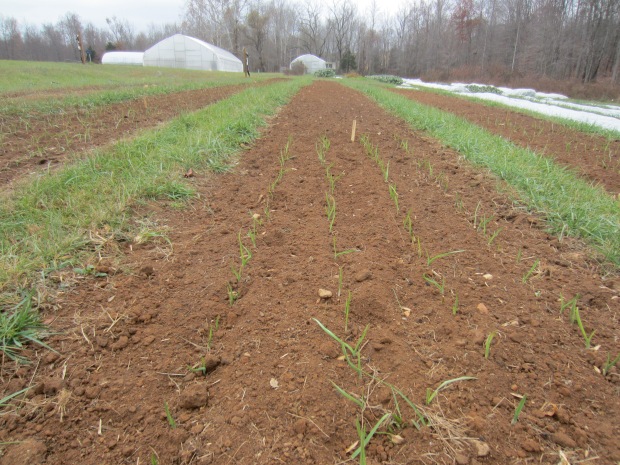 We had our first hard frost. Followed by a couple of extremely cold nights in the twenties and teens. 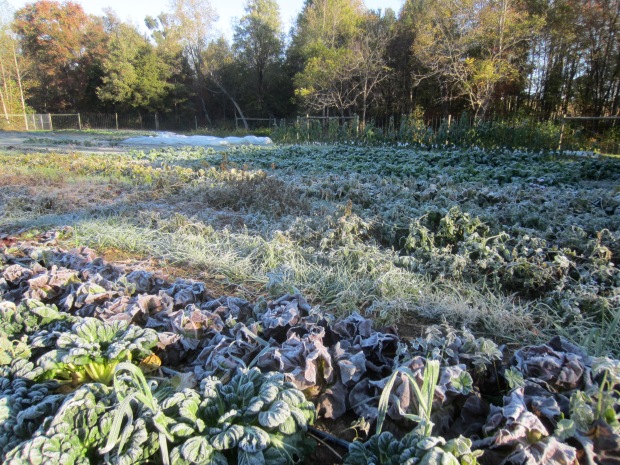 Setting up at the last summer-season market, which was held on a lovely day with below-freezing temps almost all morning. Now we are delighted to be indoors for the winter markets until the summer season starts up again in late April! 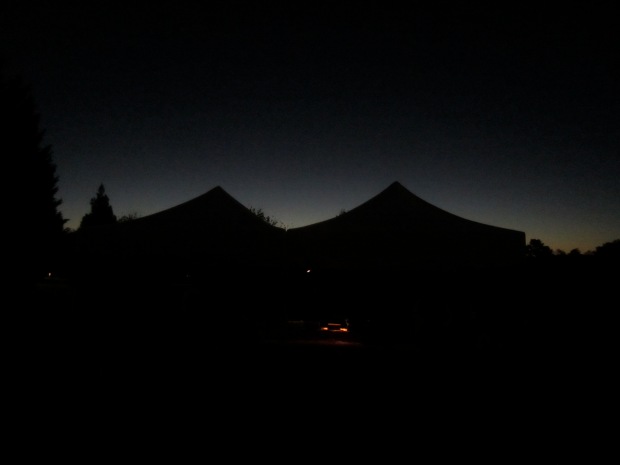 The spinach rows we seeded for winter harvest have done well despite the extremely dry weather during germination. 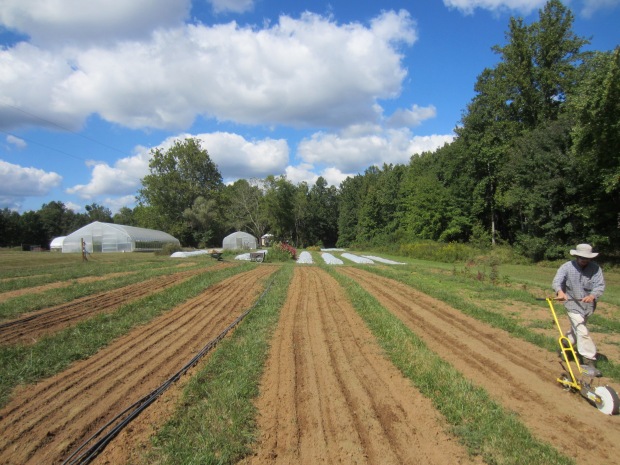 We have now covered these rows with row-cover. More to protect them from deer than anything else. 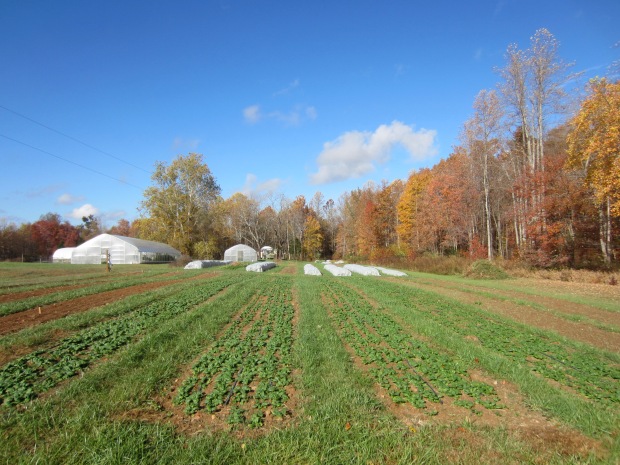 We finally took down the row of tomatoes that lasted all season in the tunnel. The row on the far left is another row of tomatoes that we planted late and were harvesting on up until early November when we had a very cold night that wiped them out. Other crops in the foreground are ginger, kale, and celery. 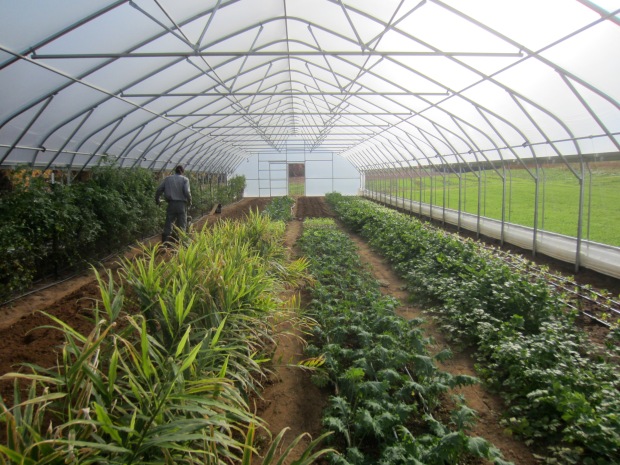 November tomatoes. It’s a first for us to have them available this late in the season. 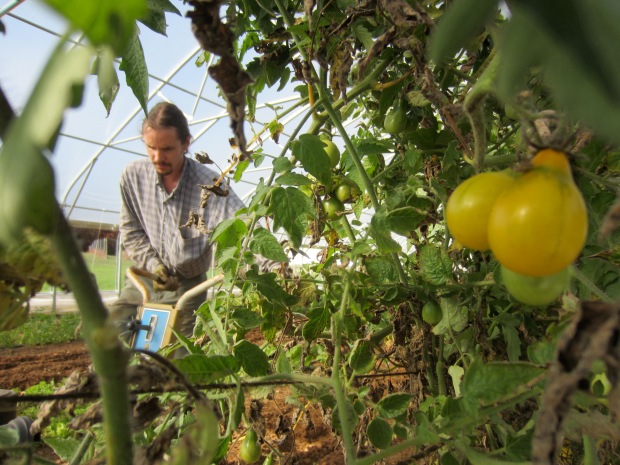 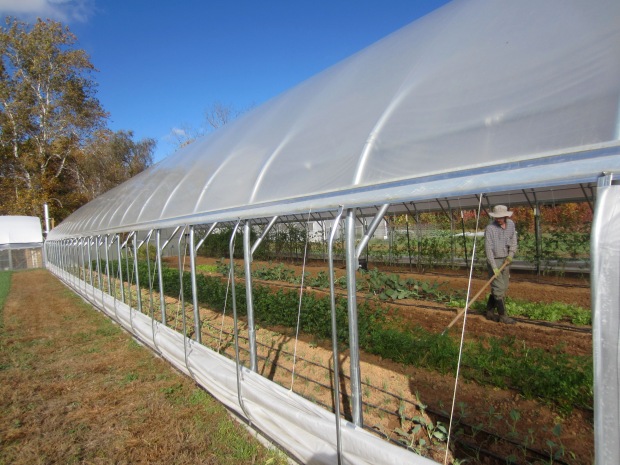 The cover crops on our fields are growing beautifully. 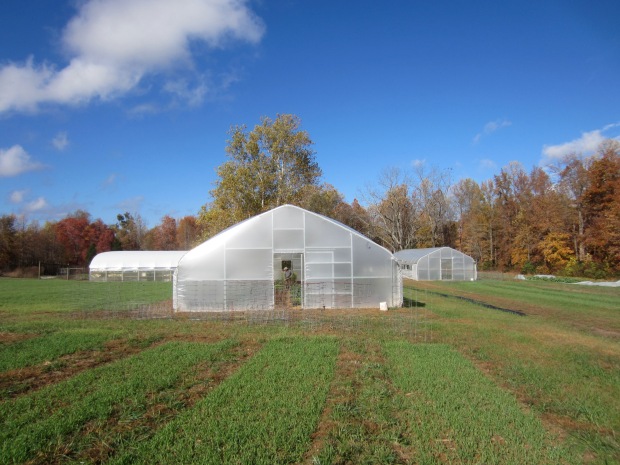 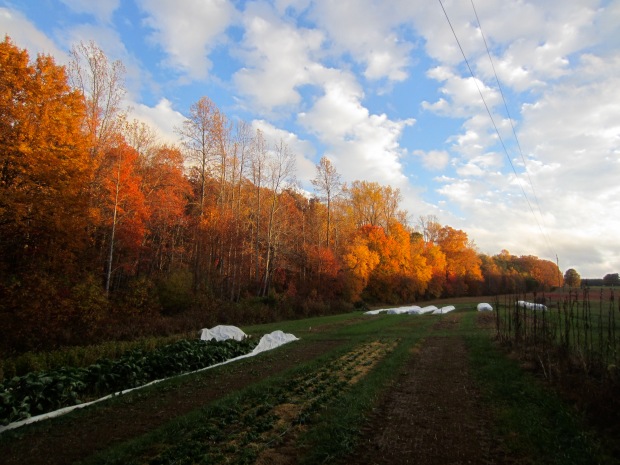 Gavin spent a little time to work on the shed roof, which has been waiting on the back burner since the spring. 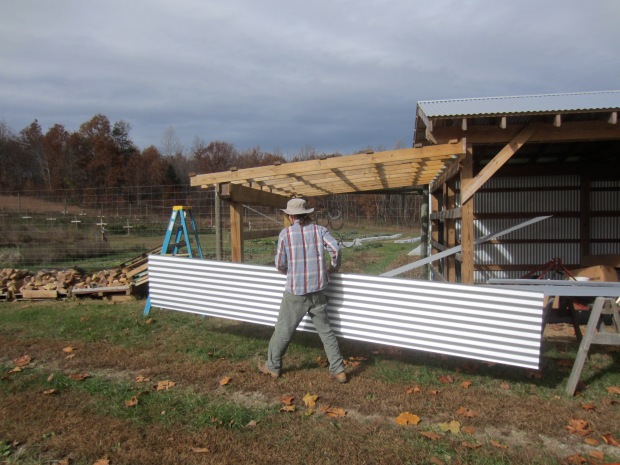 Shed roof off the shed. 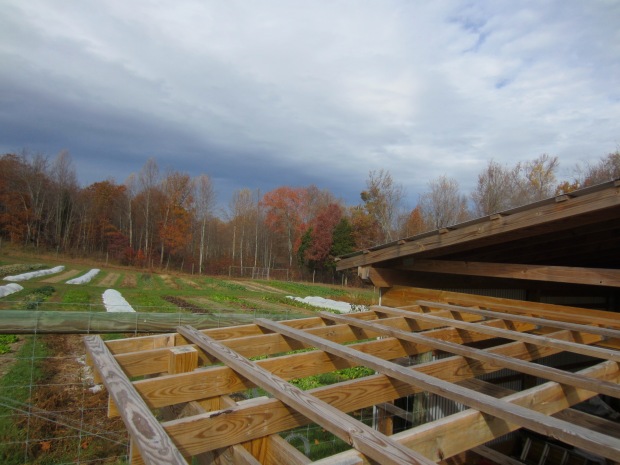 A little more room to keep the implements out of the weather. 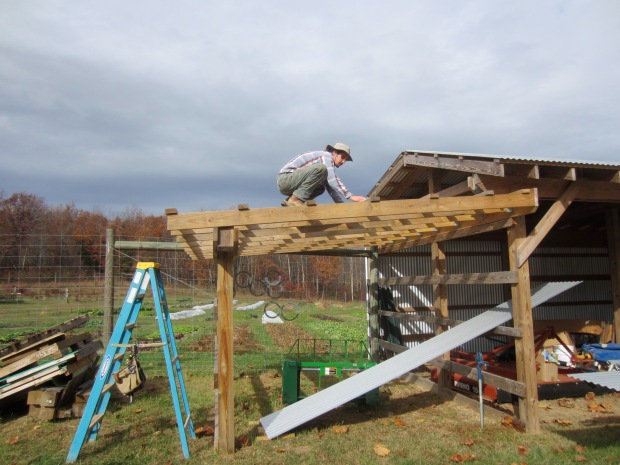 Finished wall and roof. This space is not entirely enclosed, but should be just enough protection to keep out the wind-driven rain. 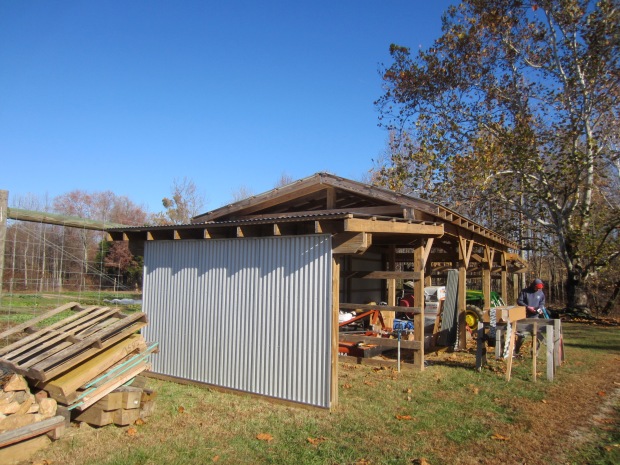 The roof on the north side does not have a wall. 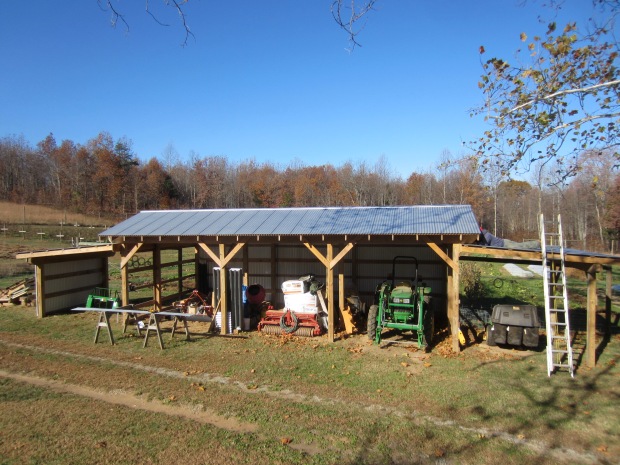 Hope we’ll have a little more for the market this winter. 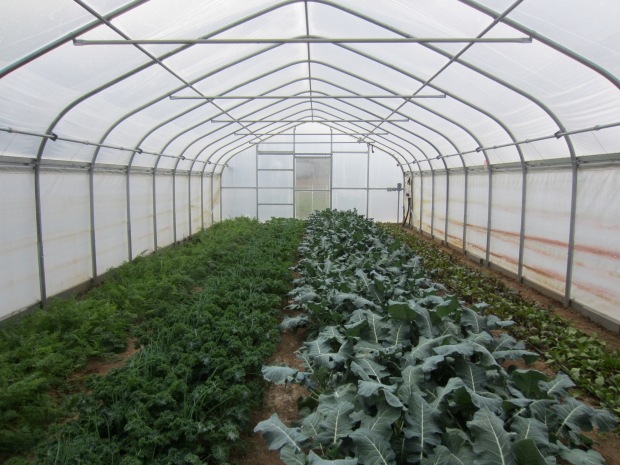